Catch Up Photos from Family and Friends This year for Christmas I gave my niece Rebecca and her husband Rob their wedding quilt. Good thing too. They'd already been hitched for a year and a half! It was a classic Log Cabin quilt, made in pale 'beachy' colors of pinks and beiges to commemorate their seaside wedding.

In October they had their daughter Rylee and the mite had some troubles before pulling through. Rylee is now a pink and perfect baby and is posing, centerfold-style, on her parents' wedding quilt. Someday Becca promises a full picture of the quilt but then again, this is the best: happy baby on quilt.

My friend Gyleen of Colourful Stitches also checked in with happy news: her boxer 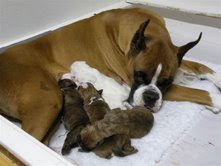 Tori gave birth on April 10th. Speaking of colorful...the pups were white, brindle, and brown and every puppy is already spoken for. Guyleen's website, with her books and dyed products, is at this link www.colourfulstitches.com
Isn't it great when you're loved and wanted?

Starting Wednesday night, I leave for a teaching trip out west. First stop: Houston, Texas. I'll get to visit family first for a couple of days and then the gals from the Lakeview Quilters Guild are taking a two-day workshop with me on the Star of Bethlehem quilt pattern. Like the Lone Star, a Star of Bethlehem has a big center star pieced from small diamonds but then the quiltmaker adds smaller pieced stars placed between the eight legs of the center motif. 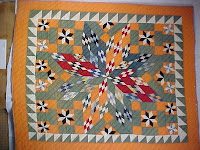 I was inspired by an old quilt in my collection. A North Carolina piece, and possibly of Lumbee Indian origin, I made a not-exactly-the-same-but-close tribute piece. 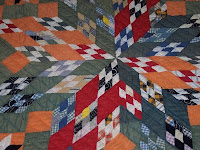 The close-up shows that what looks like a darker shade of green was probably a home-dyed blue when the quilt was made in the 1920s. Making this quilt, over an eighteen month period, confirmed for me once again that I love the process and flow of hand work. But this is not the quilt to make if you have a deadline! 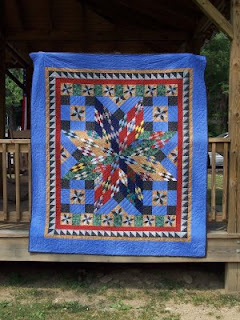 I had to bring back the idea that blue had been a part of this quilt so my version has a strong cornflower blue added to the mix. And I got finicky about those sawteeth and made sure they all matched which meant I had to make more of the little buggers. I loved making this quilt.

The Lakeview gals are welcome to piece by hand or machine and we'll have two days to make the magic happen.

Then I go on to the Washington State Quilters in Spokane. This group gets Mastering Quilt Marking, a half-day of the 19th Century Pineapple and another half-day of Conquering Curves and a double-dose, day and evening, of my favorite talk, a show-and-tell of scrap quilts old and new.
written by Pepper Cory 3 comments:

After Effects of Aprils Fools

This is not quilt-related but then again, sometimes I don't quilt 24/7. Time out for jocularity.

When I'm in town, I try to go to my local Curves three times a week. Curves, if you don't know, is a women-only exercise franchise. Lisa, the owner of the Beaufort NC Curves, is a former teacher and had the place painted with wide swathes of blackboard paint so she could leave chalked messages for us to read as we exercised.

As an ADD person, I could only stand the blackboard messages so long. One day I found Lisa's basket with chalks in it and quickly sketched a cartoon featuring a pudgy cat. On March 31, I drew an April Fools cartoon and it's gotten a lot of reaction. The cartoon featured Ms. Phat Cat as a ballerina. The caption said: "Announcement! As of April 1, Curves has a uniform requirement! *Hat *Gloves *Tutu. Also, Members must go en pointe between machines."

Lisa got into the spirit and turned up April 2 in the correct garb. Nice try with the tennis shoes and who have thought she actually had a tutu at home? Isn't she cute?


There's simply no other place I might put this picture but now I can confess I have known a few strange ballerinas...meet Hill Billy Ballerina aka Mike Galyon in drag.

Mike's our former neighbor and is a great one for sight gags. 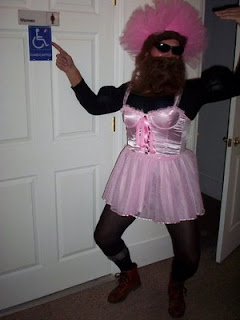 He left off his prize beany with the propeller on top and the snaggly teeth he always wears for holiday dinners because he didn't want this disguise to be too over-the-top. Restraint and good taste in the same package-hard to come by!
written by Pepper Cory 3 comments: