A long time ago (20 years or so) Rod and I traveled to North Carolina from our home in Michigan for a much-needed vacation. We met in Charlotte, rented a car, and doodled across the state. We crossed onto the Outer Banks at Roanoke and after a spin to Kitty Hawk and the Wright Brothers Memorial,  found ourselves driving south on Route 12. It was early May and the weather was brisk but always sunny. Finally we took the ferry to Ocracoke Island and stayed there several days. While visiting the historic lighthouse, I overheard someone talking about the quilting group that met the next day. I wangled an invitation, we stayed another night, and I  attended the group. The ladies met in the schoolteacher's home. Mostly we simply chatted, worked at a few bits of hand stitching, and had coffee and cookies. I was impressed by the unusual wood paneling of the dining room. My hostess said that shortly after she and her husband married in the 1930s,  a yacht had sunk off Ocracoke and as the most recently wed couple, they were entitled to pick through the wreckage. They salvaged the teak decks and used them to panel the dining room of their cottage! 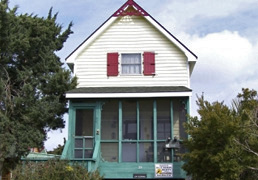 While on Ocracoke Rod and I relaxed and talked and let the sea air and vast ocean horizons do their magic. We decided to work toward moving away from Michigan. While neither of us had ties to North Carolina, we felt we would like to move to this state. Ocracoke was the turning point. This year 2011 marks the 15th year since coming to North Carolina. When I got an invitation to teach for the Ocracoke Quilting Group, I was delighted to have an excuse to go visit this magical place again. I traveled over last Tuesday and Rod joined me Wednesday. 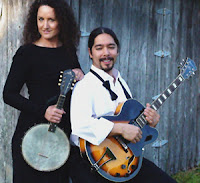 On Ocracoke we stayed at a cottage called Charlotte's Daughter owned by Marcy Brenner and her husband Lou Castro. The picture makes the cottage seem like an average two-story house. It isn't. Below the green porch is another story, the stilts of the house enclosed by screens, so the cottage is really three stories high.  It reminded me a little of Babba Yagga's hut of Russian folktales--in the nicest way of course. Skylights in the ceiling of the bedroom let in both moon light and sun light. This place has good karma and everything you'd need for a visit or vacation. When not quilting or renting cottages, Lou and Marcy are musicians and are the duo Coyote (http://www.coyotemusic.net ) and also play with the group Molasses Creek. Here's a link to a YouTube video where you can see Lou and Marcy and Molasses Creek at work http://www.youtube.com/watch?v=MWxxQMby9Lk&feature=player_embedded . 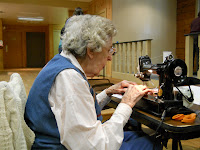 What impressed me about the quilting group on Ocracoke was that the women who took the class were fearless. A few were experienced quilters, like Eleanor who had a 95th birthday which seemed to stretch to a month-long celebration. A few regarded the rotary cutter as a foreign tool to be tamed but after a little practice cutting got right into the spirit. We also had a nice show-n-tell of Ocracoke quilts from a private family collection. 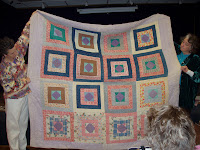 The Ocracoke group had a large quilting stash folks could draw fabrics from but most also added their own materials. Some people sewed by machine and others chose to piece by hand. The pattern was the classic North Carolina Lily and I'd emphasized plaids in the class description since plaids were the only fabrics woven in North Carolina and are always associated with this state.

My own black and white blocks for an eventual quilt were coming along but the first NC Lily block I made (orange of course) became the class sample. 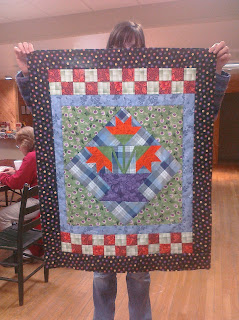