OK-the upcoming Mother's Day holiday is a tad bittersweet for me. I'm not a mother (unless you count numerous animals I've fostered over the years) and my own's been gone since 2002. Mom's death was unexpected. Even at 81, Mary Wetzel Peddie was a force of nature and somehow I couldn't picture life without her. Frankly, I took her death hard and realize in looking back that I spent the fall/winter of 2002/2003 in a depressed state. Finally between my husband and a good friend's prodding, they helped me 'fess up to the funk I'd fallen into and to try to do something about it. The turning point was this slim little book called Understanding Mourning. It made a world of difference. I find most of my copies used on Amazon now and send a copy to any friend in need.
But Mom still creeps into my thoughts as I work, especially as how she was the one who shamed me into buying and using my first computer. She had taught herself DOS way back when and was determined not to be left behind in the digital age. One small problem with Mom's love affair with her computer was that my sister Mary Frances had to clean up her ebay debts for weeks after her death since Mom was always trolling for treasures online!
Fast forward to October 2010, almost nine years to the day that Mother passed away. The folks at the Missouri Star Quilt Company contacted me in a panic. They'd designed a Charm Pack program based on my little Apple Core template I'd made years before for the EZ Quilting Company, a subsidiary of Wrights. Wrights had discontinued the item and Missouri Star asked if I might do another Apple Core template for them. No problem but I did redraft the Apple Core shape to have a slightly shallower inward/outward curve. The Apple Core shape just got way easier to sew! Missouri Star and I also went for a much larger version of the Apple Core template. We thought that with gorgeous large-scale prints, the bigger Apple Core would be newbie-friendly and also lend itself to the fabric cut called a Layer Cake. Missouri sells both sizes retail and wholesale to shops. Go here http://www.missouriquiltco.com/catalogsearch/result/?q=apple+core+template .

Both sizes of the new, improved Apple Core template have been a hit. Here's the small size, made into a teddy bear's quilt and some other pictures of the large size in a quilt top. 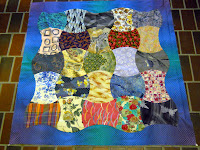 By the way, instead of the traditional 999 pieces for a classic Charm Quilt, my Big Mama Apple Core template needs a mere 99. This is a crib or wall hanging-size version with 25 pieces. 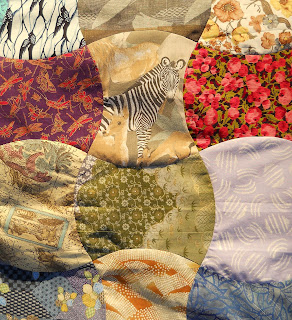 My first quilt top made with the Big Mama was from favorite fabrics and one of those fabulous-I-don't-know-what-to-do-with-it-fabrics in my stash. The zebra in the middle was cut from one of Mom's blouses since she was also an animal lover and the zebra was her all time favorite mammal. 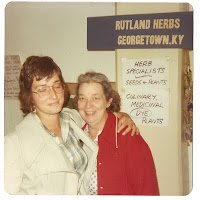 The picture was taken somewhere around 1971 at Mom's place of business in Washington, Kentucky. 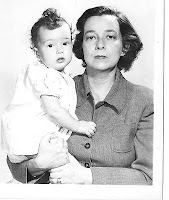 And if you want to get really nostalgic, this snap dates from my very first passport picture in 1952. We're in about the same positions and Mom is looking directly out into the viewer's eyes.

Happy Mother's Day to you all.