A Day to Remember--Katrina and Quilts for the Coast 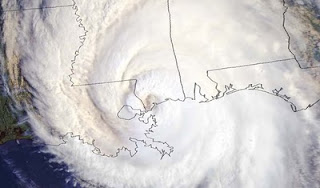 Five years ago we were glued to the TV as Hurricane Katrina finally hit the Gulf states. The center of the storm came ashore on top of Waveland, Mississippi. That's where my friend Patti Brown grew up. Patti owns ALB Fabrics/The Quilted Butterfly quilt shop in Morehead City, NC. We talked several times during Katrina week. We both felt so helpless! The news only got worse in the weeks that followed. The devastation from the storm was so complete that it was hard to comprehend. Only pictures can express the horror. 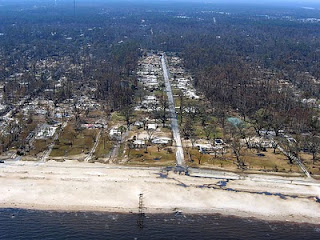 These two pictures was taken two days after Katrina from a NOAA helicopter. The formerly beautiful waterside towns of Waveland and Bay St. Louis were almost wiped off the map. The cement slabs of homes and businesses were all that remained of most structures. A few, like Christ Episcopal Church in Waveland, were recognizable due to a distinctive feature. See the church bell tower below. 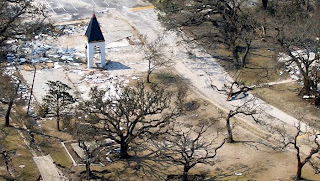 As a quilter, Patti reacted to the tragedy and started to do naturally what quilters do: make quilts at it. Whatever 'it' is--storm, terrorists, flood, and pestilence--we make quilts at it. Quilts for the Coast became her cause. She knew that folks in her hometown were resilient and that many people were camping out in the remains of their homes. They had to. The insurance companies wouldn't pay if you abandoned your home. FEMA was a joke. Kim and David King, the owners of this formerly beautiful home in Waveland, got the point across. 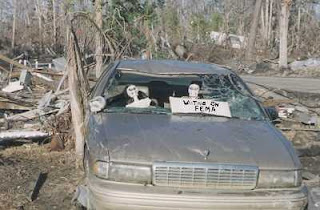 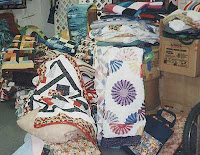 I put the call out on the internet and quilters across the USA responded. Soon quilts began to arrive at Patti's shop and pretty much took over the back rooms. The quilts continued to stream in all through the Fall  of 2005. Finally in December, when it was getting cold down south, Quilts for the Coast went into motion. Friends from Patti's church lent a van and it was packed solid ---700+ quilts were going on a road trip to Mississippi. Patti and her husband Rod and myself squeezed into the van and set out. Destination: Christ Church in Waveland, MS on a Sunday morning for the great quilt give-away. 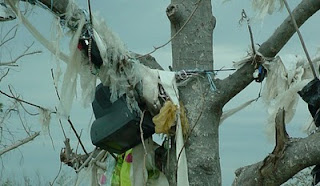 Patti had lived through Hurricane Camille and knew what awaited us. I was not quite so prepared. Memories of the trees still haunt me. (photo by Brendan Holder) There it all was--people's lives--still caught 30 feet up in the branches of the old oaks. It was the spookiest landscape I've ever seen. 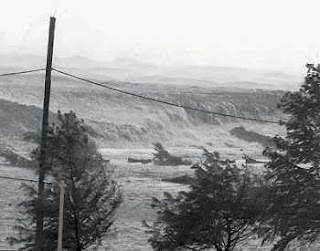 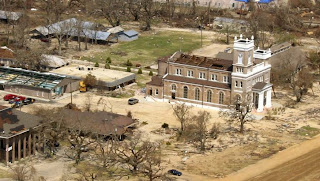 Why was there stuff in the trees 30 feet up? Because that's how tall the Katrina wave was when it came ashore August 29th. The wave picture was snapped from the third floor balcony of Saint Stanislaus in Bay St. Louis as seen (left) after the storm. I can only imagine how terrifying that must have been. 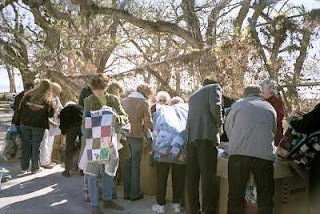 We arrived in Waveland on time and set up for quilt distribution. People arriving for church services knew we were coming. They lined up and chose quilts for themselves and for absent friends and relatives. For many, it was the first time since Katrina that they were able to give someone else something. One little boy chose quilts for his school class. There were enough to go around and a few left over went to a hospital. It was a magical day. 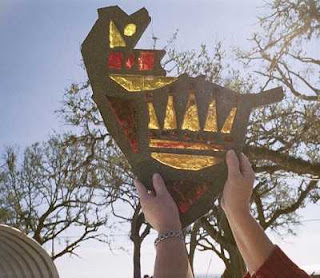 If you ever have a chance to work on the distribution end of a charitable quilt drive and actually hand someone a quilt, do it. Suddenly our craft makes the most basic sense: quilts bring comfort. You will be a different person. The picture says it all--from the wreckage of the stain glass of Christ Church in Waveland, Mississippi, there's always hope. I am grateful to have been a small part of Quilts for the Coast.