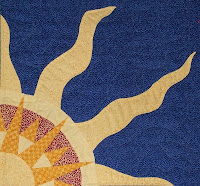 Summer solstice happened this year on June 21st at precisely 1:45 AM when the sun stood directly over the Tropic of Cancer. So welcome summer and welcome my horoscope sign, Cancer the crab. I am a true crab. I love my home and get a 'mite tetchy' when absent too long from it. In addition I love all domestic rituals-with the notable exception of housework-and true to the astrologer's description, am "...creative, sensitive, and can be quite moody." You got a problem with that? 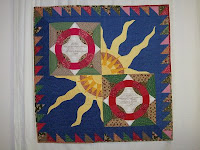 In honor of del sol, I rooted around and unearthed a wall hanging made in 1997. The occasion was a challenge from David Textiles to use their latest line of fabrics called An Enchanted Garden . The two pieced blocks are Full Blown Rose and haiku poems are written in each one. Ironically, while neither poem is about summer (they're on spring and fall) the sun imagery comes through as the strongest element of the piece. 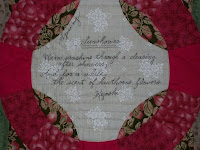 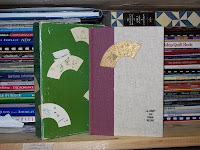 The haiku were from my favorite haiku book, A Net of Fireflies, by Howard Stewart.

On this anniversary of summer solstice I remember June 21, 1974 when I was in 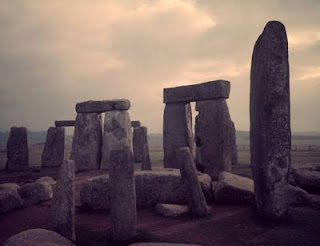 England and with thousands of like-minded hippie souls, headed to Stonehenge for the occasion. Modern Druids, bikers, backpackers from every country converged on the monument. But the most fun was the night before since most folks camped in the woods at the edge of Salisbury Plain. The trees were so huge you couldn't get your arms around them and as gnarled as any drawn by Arthur Rackham. While wandering from bonfire to bonfire, I picked up a companion, a spritely beer-drinking Brit with long hair, glitter on his face, and wearing four-inch silver platforms. Even then he didn't come up to my shoulder! I finally ditched him by weaving quickly through the forest although I could hear him for a long time, stumbling along in his heels, yoohoo'ing, "American girl, oh, American girl."

Have you seen this quilt?

Recently I was doing some reading on Ruby Short McKim, the famous quilt designer and entrepreneur from the 1930s. Ms. McKim is most famous for her book, which most of us met later as a Dover reprint, called One Hundred and One Patchwork Patterns. The original, published in 1931, had a lavender hard cover.

The Dover version, c.1962, echoes the earlier lavender but then adds garish quilt blocks. Dover is a reprint house and gladly snatched up this title when its copyright was not renewed. Word to the wise... Ironic that the 1931 book sold new for $1.50 postpaid and the 1962 paperback version was only .50 more at $2.00! The Dover 101 was my first quilt book and its cover shows lots of wear since it was my bible until other quilt books started to be written in the 1970's.

A frustrating thing about the Dover version was that it reprinted some pages of embroidered quilts but didn't give designs. Turns out these pages were actually from the McKim Studio mail order catalog and in the 30s were available as kits. But by 1962, the McKims had long gone on to other business ventures ( Kimport Doll Company) and the tantalizing diagrams of the long-ago designs were out of reach for us latter-day readers.

One quilt in particular still stirs readers' imaginations. Ruby McKim was a proficient

artist and had brought the Victorian redwork tradition forward with her diverse designs for embroidered quilts. Readers were urged to try the flower designs in multi-color floss, to add applique touches, or even to color the diagram with crayons and then heat the squares to give a watercolor effect. Happily for us today, Ms. McKim's granddaughter Merrily has reprinted this classic pattern and you can find it at her website http://www.mckimstudios.com/04treasures/quiltspecial/quiltspecial.shtml under the title Flower Garden Quilt #401.

A contemporary version of the Flower Garden quilt is the quilt I'm asking you to be on the lookout for. Here's the scoop: in 1977 quilt artist Martha Opdahl made a beauty-a tribute to the older McKim pattern but with a bohemian color scheme that makes any Flower Child sigh with delight. Here's the description in her own words. Martha Opdahl writes on her website http://marthaopdahl.wordpress.com/ :

In 1977, I participated in a national quilt contest–the “Flower Garden Quilt Contest”–sponsored by the Indianapolis Star newspaper. It was my first entry into a juried show. The contestants were each to produce a quilt based on a set of 24 flower designs by Ruby McKim. You could stitch them any way you liked, but the sponsors wanted contemporary interpretations–not what your grandmother would have made. I decided on bold, solid colors using a reverse applique technique to render stylized versions of the traditional McKim designs. I was influenced by “The Rockefeller Quilt” designed by Dorothy Weatherford, designer for the Mountain Artisans Cooperative of West Virginia. (That quilt was a gift from the quilters to Sharon Percy Rockefeller for her support in their efforts to establish and maintain their cooperative.) The Flower Garden contest drew many beautiful and inventive entries. In the end, I won first place with mine, which disgruntled many. Yet one viewer at the show declared it was “the only contemporary quilt” there. It was a welcome compliment amidst the dissenting noise. Coda: The quilt was purchased by Sharon Rockefeller.

Here's the mystery: Ms. Rockefeller can't find the quilt! Now a museum wants to exhibit this quilt and it's missing. Can anyone who reads this blog shed some light on where Martha might find her lost masterpiece?

Here's the picture sent to me by the Rockefeller's house keeper but it's the famous Mountain Artisans quilt, not Martha's quilt. You sure can see the resemblance, can't you? 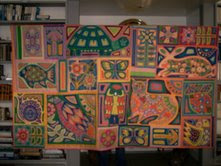 If you know of the whereabouts of Martha Opdahl's Flower Garden quilt, please contact her at her website as soon as possible.
written by Pepper Cory 4 comments: 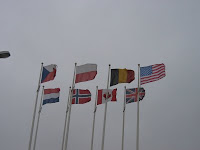 Today, June 6th, is the 65th anniversary of D-Day, the invasion of Normandy by the Allies. Their flags are seen left.

Predictably, CNN and all the networks reported that politicians visited the site and made long-winded speeches. For a more personal and meaningful celebration of this historic day, here's a link to a website where D-Day veterans talk about their experiences in their own words. Check out www.normandy1944.info . If you had a relative in the D-Day invasion, you might find their story here or you can add your own.

Someday I just want to go and walk those beaches and listen to the wind. My niece, 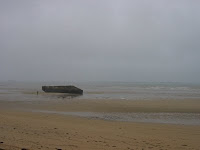 Julia Marshall, has been to Normandy with her family and she took a lot of pictures. With Julia's permission, here are a few poignant images from that trip.

There's still a hulk of a landing craft in the surf. 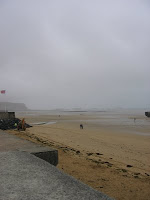 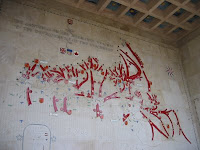 The map on the wall in the visitors center that shows the allies landing points on the beaches.


The American cemetery at Normandy. 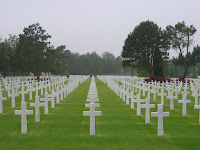 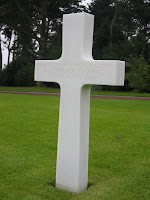 And lastly, for all veterans known and unknown, my heartfelt thanks for your service to this country. Click on the picture so you can read the inscription.
written by Pepper Cory No comments: