Flying Onto the Internet 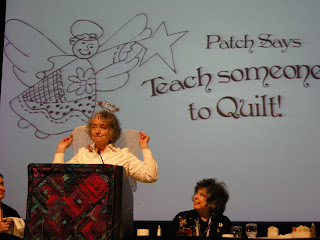 Oh boy-I hadn't meant to ignore the blog for so long! This past autumn was a busy time. I was teaching and traveling and ending a stint as president of the International Quilt Association. In 2010 I had given a lecture at the IQA luncheon at the Houston International Quilt Festival and urged everyone to "Be an angel-teach someone to quilt" and even given out bumperstickers with the sentiment. By 2011, I was ready to hand over the office to my very capable friend and fellow-teacher Stevii Graves. I didn't pass on the halo and wings however!

Then it was time to get ready for a new experience: a film crew from Craftsy.com was going to come to North Carolina the first week in December to film me! We'd been communicating since August but now it was crunch time. Craftsy is a website that offers all sorts of how-to classes. You buy the course online and it's uploaded to "the cloud" and you can reference the course at any time--it's always yours.You can even take notes during the playing of the video and stop it anytime. The best aspect of this online learning is that you're part of the Craftsy community since you can ask the instructor questions plus post photos of your projects. It's a grand idea and taking off like crazy. I totally understand the concept of learning from a computer and empathize with the person who comes home from a job and sits down to play at her computer for fun but only has a limited amount of time to spend on crafts. Sign me up--digital quilt instruction is one more way to convey this lovely craft to a new generation.

The Craftsy crew rolled in right on time Sunday evening December 4th. The producer was Maria Sandhei, a blond bundle of energy packaged in Ninja-black and a pink headband. 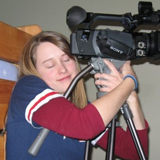 Maggie Hart handled all the video editing, all the while popping Trail Mix. Prediction: one day Maggie will be directing her own films--when she isn't snow-boarding (her other passion). 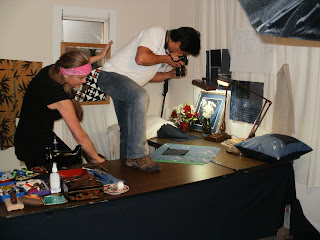 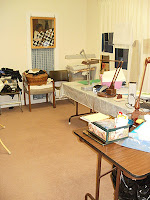 Behind the cameras Joe Baran was the wizard, hopping from lens to lens, zooming in for close-ups and sometimes getting into downright dangerous positions to get exactly the right shot. Joe loved all the tiny little shiny needlework tools and totally understood that my Featherweight sewing machine has a name (Jessica) and a history. 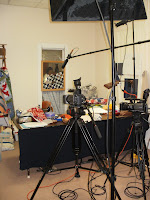 Prior to set-up, the studio was as clean as it's ever been but after all the video equipment and three more people crowded in, the space felt very tight. We were always doing a ballet over the wires and ducking the umbrella-type reflector thing-ies.

Filming started at 8 AM Monday morning and aside from three nights (we usually worked until 7-8 PM) it was solid activity until they pulled out late Thursday afternoon.

I don't think I have ever worked harder. My hat's off to the people who make movies and film these videos. You can purchase the video we made at the Craftsy website www.craftsy.com. It's called Scrap Quilting, Waste Not, Want Not. In the works: two workshops (shorter how-to programs) on Sashiko projects! Whew. 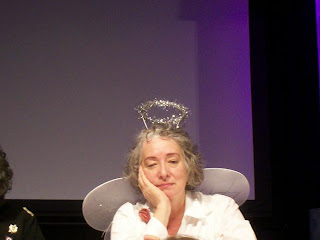