Quilt Competition on a World-Wide Scale

If you're not a quiltmaker, some of the following won't make sense. You might not even believe it. But if you want to know why my favored craft/vocation/profession of quilting is a very big deal, some basic stats follow. Quilting is one of the-- perhaps the most--popular forms of needlework on the planet. Note: I won't debate angry knitters (they carry sharp sticks) if this statement is disputed but you can't argue with this factoid: quilting is estimated to generate more than 3.58 billion dollars to the economy. That's from a 2010 study and my bet is that quilters are spending more than that in 2013. 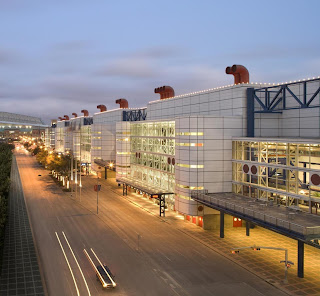 Every year,  60,000-plus eager quilt afficiendos descend on Houston, Texas in late October for two related events: the International Quilt Market (the largest trade show catering to the needs of quiltmakers and all fiber friends) followed less than a week later by the International Quilt Festival. While Market attracts all the business-related interest (sewing machine manufacturers, fabric companies, pattern designers) and those shop owners from around the world who are looking for new and exciting inventory, Quilt Festival is for the quiltmakers themselves. Both these events are coordinated by a company called Quilts Inc., the brainchild of Karey Bresenhan, who foresaw that her favorite hobby was about to take the world by storm way back in 1974. During Festival, quilting and fiber arts classes run non-stop during show hours and more than a thousand vendors' booths crowd the whole floor of the George R. Brown Convention Center. The GRB, also affectionately known as "the Love Boat" since its red, white, and blue facade reminds folks of a cruise ship, becomes an object of intense interest on the web as stay-at-home quilters check in with bloggers, podcasters, and their own Facebook page while Friends record attendees' comments and post pictures. Houston loves the quilters--the city makes upwards of 50 million every time the quilters roll into town. And for the most part, quilters are ideal conventioneers. They love doting cab drivers, good restaurants, and are way less rowdy than concert goers or tailgaters at ball games.

One of the outstanding features of  Quilt Festival is the annual exhibition of juried quilts organized by the International Quilt Association. By juried, it means that mucho entries have been pre-selected for hanging in the show. If you'd like to know more about IQA, here's a link http://www.quilts.org/about.html. IQA winners get lots of press, they're interviewed, and attendees ask for their autographs. It is quilt-stardom in a big way. 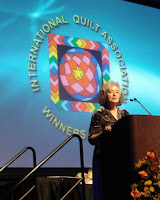 As a past president of IQA, I adore the night when the winners are announced-for me it's nothing short of the Academy Awards of Quilting. The lights go down, the Grand Ballroom is wall-to-wall people, and as each winner's name is called out,  a gold curtain rises to reveal their winning quilt. The winner, if he or she is present, gasps and sometimes cries and then strides up to the podium to recieve a check and a large bouquet of flowers while posing for pictures.

The selection process for a quilt making it into the IQA exhibition is a long road and usually starts at least the year before as a quiltmakers sets her sights on competition. There are twenty different categories to consider and size and syle requirements to be followed. Plus your entry form including both digital and a physical photo has to be in by the end of May. IQA sets very high standards: no kit quilts or block-of-the-month quilts, no work-for-hire quilts (finished by someone else), or a reimterpretation of someone else's work. The best avenue to follow when aiming for an IQA quilt is that it be your very own original work, meaning your own design, or a fresh interpretation of a traditional design.

Those quilts juried in (the acceptance letters for 2013 just went out this past week) travel to Houston in September and are judged by three judges in early October. When I judged,we started at 8 AM and worked until midnight two days straight. Quilt judging is not for sissies. You must be able to prove a point and articulate what you like, or don't like, about a piece and be willing to back up your comments. The winners, and all the workers who made it happen, are sworn to secrecy,  the hanging of the show is planned, and every last detail double-checked until the quilts go up at the George R. Brown Center in the last week of October.

Even with excellent design and workmanship, sometimes your entry does not get juried into the IQA exhibition or if in the exhibtion, win any kind of a prize. Blame the fact that your competitors are simply the best quilters in the world! If you're disappointed but plan to try again, then step back and study what has won in previous years. Not to copy those past winners, mind you, but to ask yourself, "What's interesting about this quilt?" and to really look closely at the work.

Sometimes the most endearing quilts don't wear blue ribbons. Those attending can't tell why some gorgeous quilt didn't win a prize. The year I was a judge (2002) there were so many fine entries we split hairs to award  top honors. But there is a consolation for three people: each judge gets to pick a Judges' Choice award on no other grounds than that they personally loved the quilt. That year I fell head-over-heels for a piece by Taeko Ohya of Japan. Her depiction of the Asian calendar and its symbolic animals was strong and beautifully concieved and executed. And if I could have rolled it up and smuggled it out past tight IQA security, I would have. Here's a beautiful image of Taeko's quilt for your enjoyment. Photo by Jim Lincoln and many thanks to Quilts Inc. publicity whiz Bob Ruggerio for finding this in the archives.