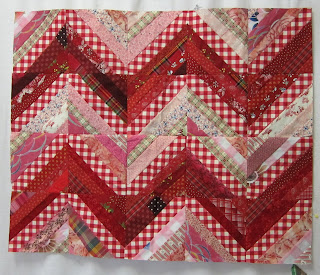 It's been a while since I posted here but oooh boy, when you wake out of a perfectly good sleep and realize you've just come up with the best way to finally finish THAT quilt, you'd better hop to it! And so I have. The little string-pieced quilt here is the Phone Book Quilt taught in my video for Craftsy www.craftsy.com. When Craftsy returned the samples, there were three half-done blocks in the box  and a single sad page ripped from the phone book with the penciled notation "Start with a page from the phone book". The project was hanging fire until...last night. 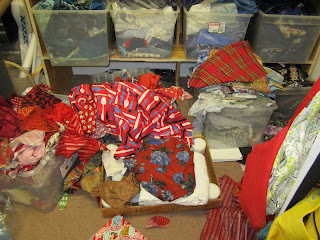 Faced with an empty design wall at the studio, I pinned up the Phone Book Quilt and started messing around with with the half-sewn blocks. The solution came after a while: a block off-set at each corner and then long pinkish strips to finish the four sides. Different pinks of course. But--big BUT--one string-pieced block was MIA and so was the fabric to finish it! I ripped up the studio trying to find the cherry gingham for the block's center strip but it was a total no-show.

Formerly such a lack of the "right" fabric would have stopped me dead in my tracks. Not today. I have the internet radio station Pandora cranked to hard rock and nothing is going to prevent this quilt from getting finished-today! So, taking a leaf from family history, I sewed the last block with a totally different print as the center strip. (Psst-it's second from the left-) So there, spit-in-your-eye etc. That's where the raisin in the title of this post comes in.

Supposedly (before I was born-family mythology) when my parents were in Cairo, Egypt (Dad was the air attache at the American embassy) they attended some swank banquet. Lots of food and undoubtedly wine etc. Rice pudding was the final dish. And then one of the raisins in Dad's dessert moved! Dad scooped up the offending bug, showed it around, and then declared, "I say it's a raisin and I say to hell with it!" and swallowed the spoonful whole. 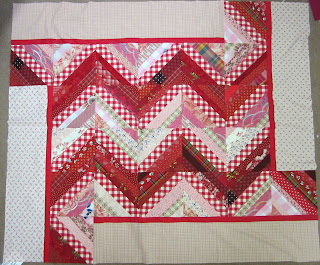 So, I say it's a raisin and I say to hell with it. Who needs a gingham when there's aspirin-size polka dots?

Tomorrow I get to rip out all the paper from the back of the blocks. 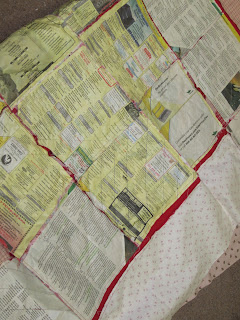