Earlier this month I traveled to Brasstown, North Carolina to teach at John C. Campbell Folk School again. Had a blast! The news and pictures will make for two full blog posts because there's so much to talk about and to see. The juxtaposition of the kilted blacksmith (who wanted to see what we were doing since I'd told him we fondled fabric-) with Betty Belanger's String Star wall hanging on show-n-tell day about says it all. Little did he know he was in danger of getting a nice patch cut out of his kilt...

The class was titled In Praise of Plaids and of course was on during Scottish Heritage Week. My traveling companion and able assistant in class was Penny Prichard who lives in Tara-on-the-tracks, a huge white columned house sitting right on the side of the railroad running through downtown Benson, NC. She and her husband David no longer even hear the trains but I can tell you that at least six trains come barreling through Benson every night! 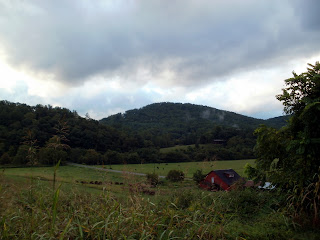 As an instructor, I got to stay in the lovely little Log House and saw this view every morning as I hiked to breakfast--not hardship duty. JCC is well-known for its great meals and thankfully, while the Scottish cuisine students did make a pass at faux haggis, we were spared that experience in the dining room.

Class enrollment was six enthusiastic students and we had a great time. The first evening I unrolled my masterpiece--a queen-size sampler quilt top using almost all plaids. I was so proud of having thought of a way to utilize diverse quilt blocks and yet unify them in one quilt. I hoped it would be an inspiration for students to try different blocks and of course to use plaids. The handout packet had the graph for the sampler and six different blocks to try. Boy, did I learn a huge lesson--actually two lessons. The first is this : when you make an enormous quilt, it can be intimidating instead of inspiring.

So how big was the plaid quilt? It measured 82" wide and 116" long. As I hung it on the design wall of the classroom, the quilt was so big it had to be hung sideways and thus somewhat destroyed the effect since directional blocks, like the Schoolhouse block in the middle, lay horizontally. Viewers had to tilt their heads to take it in--not the dazzling result I'd hoped for. 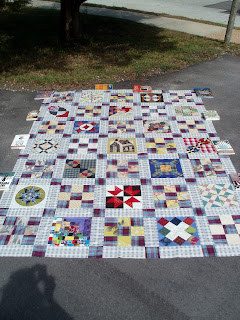 This photo was taken after returning from JC Campbell. The quilt top is stretched out in the parking lot behind the studio and I'm up on a ladder. The plaid quilt top officially has a name now:
the Big Ass Sampler Quilt.

This is the nameplate block in lower right.

So what was the second lesson I learned? That you can never tell exactly what will take folks' fancy. Turns out an antique quilt I'd brought as an example of shirting plaids swept half the students off their feet and that's the quilt they wanted to make. Meet the Oklahoma String Star quilt, the quilt that inspired half the class to work with plaids and  love 'em. 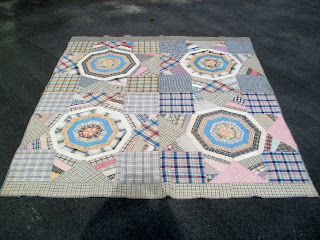 This c.1920 quilt was an auction find. I rarely show it when teaching since it's heavier than a dead mule (translation: it's VERY heavy) and takes up too much space in a suitcase. But since Penny and I drove (OK, she drove, I rode like a sack of potatoes-) I could bring extra sample quilts to the JC class. Serves me right-- first day of class, I found myself drafting an enormous 45-degree star leg so people could paper-piece over it with strips. While half the class took off on their string-pieced-over-paper-eight-point-enormous-stars, the remaining three went their individual ways. 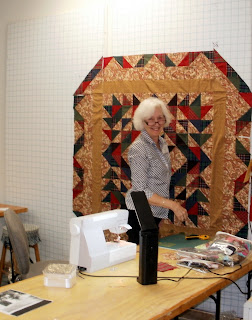 Paula from Georgia came with a project in mind. Turns out she had more diverse fabrics than the quilt shown in the book and seeing as how it was her first fling with a design wall, keeping all those triangles straight was a challenge.


After a night's visit from the Quilt Fairy, her layout came together and she charged on. Truly, her quilt turned out prettier than the one shown in the book! 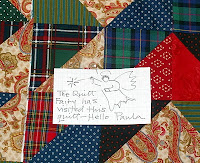 Then there was Hilda, also a Georgia girl. who had taken my class two years ago. She chose the Easy String Star pattern (four points) and started to produce blocks in her beloved batiks with the occasional nod to the plaid theme. At 88 years young, Hilda worked circles around the rest of us. 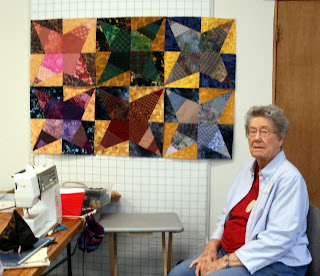 I want to be like Hilda when I grow up.

Stay tuned for another episode of 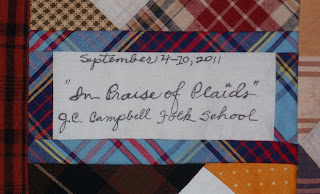 next week on this blog.
written by Pepper Cory 6 comments: