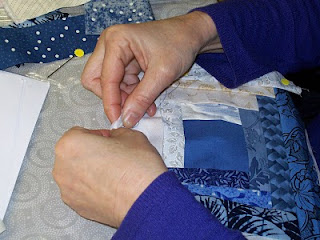 For a week, the work's been all blue. Last Saturday my friends Julie and Sarah came over to learn how to make a folded Log Cabin quilt block by hand. Although both possess sewing machines, neither is truly at home with the contraption and preferred to do the old needle-n-thread route. I had all the strips and backing blocks cut so they just sat down and sewed. 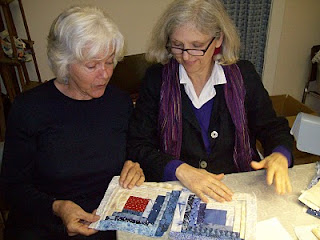 In less than three hours, both had produced respectable blocks and couldn't have been prouder if they'd laid an egg. See, I told you so--quilting can be contagious! 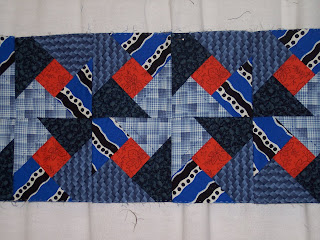 The fun continued on Monday. In the past I'd made some little folded patchwork blocks in a pattern I named Origami. Then for some reason, I decided to experiment. Sometimes things work and sometimes they don't...
I changed the dimensions of the backing block and the relation of the center square to the rest of the block. And oh yeah, I ragged them. For those who are not familiar with quilting trends, 'ragging' is when you leave raw seam allowances , feather the seams (cut closely with scissors about 1/4" apart)  and then wash and dry the work. The seams 'rag' and get all frayed and fuzzy. You can even brush the frayed seams for more dimension. 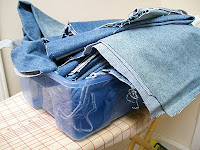 I read about ragging before trying it. And since I also wanted to use denim for the backing blocks (I have a little denim--I lied--I have a LOT of denim) the directions suggested really deep seams. Like 1" seams. Because you're cutting through multiple layers, you need a good pair of spring-loaded scissors. To misquote Crocodile Dundee: "Now, that's a scissors!" 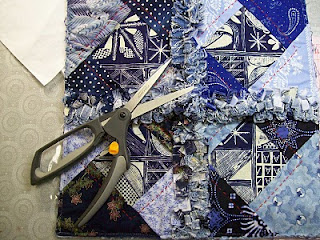 While I happily sewed four blocks  and popped them in the washer to fray beautifully, I was not prepared for the uber-fuzzy seams that resulted. These seams are about an inch high and the work shrank quite a bit. Back to the drawing board.

Note to self:
1) Choose less busy prints so the geometry of the patchwork can be seen
2) Sew smaller seams--maybe 1/2 inch?
3) This is just too much! Maybe sew the rag seams on the back of the work rather than the front next time.
written by Pepper Cory 8 comments: 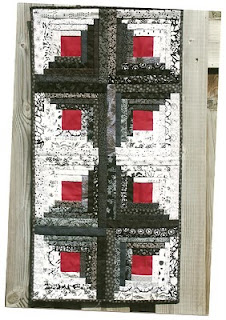 Recently a student from a 2008 class sent me some pictures of the project she's completed--wow! Jeanne van der Vlies is from the Netherlands but we met at a quilt show in Harrisburg, Pennsylvania. The event was only a three hour class called the Antique English Pleated Log Cabin. All work was by hand and most students got the hang of it and produced one block--ho-hum. Not Jeanne! She continued on and made this wonderful wall hanging.


The detail shows how the logs (strips) fold over and give the work a three-dimensional feeling. The back of the block is also the back of the work so this pattern may be  the original quilt-as-you-go pattern. The technique hails not from the United States but from the Isle of Man (between England and Ireland) where the pattern is called Roof Tile. The theory is not too great a stretch since in the 1840s thousands of people emigrated from the Isle of Man to the United States and likely brought the pattern with them. To American eyes, the strips laid at right angles could be found in log cabin construction and so we re-named it and later generations assumed an American origin.

And then just yesterday Laura F. Strating-Jansens from the Netherlands sent more pictures--this time from a Houston 09 class.
She owns a quilt shop in Amersfoort called Laura's Quilt Atelier (studio). Amersfoort is a bustling city and major railway destination but is also an ancient town (it just celebrated its 750th birthday!) slightly southeast of Amsterdam. Laura often makes trips to the United States with her quilting friends and that's where we meet--at quilt shows! 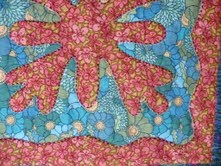 Here's Laura's quilt she made as a result of the class called Dakota Flower. The style uses a stitch technique I call Retro Applique. That's applique with a contrasting thread in a running stitch at the edge of the motif. Stitches are larger than usual and meant to be seen. It works best if you relax and realize that you're not doing traditional precise work a la Baltimore but should just have fun.


Don't you love it when quilting makes the world get smaller?
written by Pepper Cory 4 comments: