Everyone knew that war was coming. Since that June when he'd graduated from West Point and immediately  gone into flight training, both Scott Peddie and his fiancee Mary Lib knew that some time soon they might get separated. They decided that if he got orders, they'd immediately get married. Mary Lib, majoring in biology at Vassar, was in her sophomore year. But if she was married, she'd have to leave school  and she regretted the rest of her life not being able to continue her schooling There would be huge changes ahead for both of them. Then Pearl Harbor happened December 7 and by the next day, with an impassioned declaration from President Roosevelt, we were in the war. A declaration of war on Nazi Germany followed December 11 and everyday life in the US shifted into a wartime rhythm with "Put your shoulder to the wheel-" determination.

After many telegrams (the telephones lines were overloaded and she sometimes had to wait hours for a connection), Mary Lib left Vassar the second week of December and took the train back to Oklahoma City. Scott was granted one day leave. They were married Christmas Day 1941and immediately started life as a married couple, moving from airfield to airfield as the engineers and pilots worked to get the kinks out of the B-26 Martin Marauders he flew and the men in his squadron shaped up, shipped out, or bought the farm. The couple only owned a convertible car, one steamer trunk with their clothes and his uniforms and a cocker spaniel named Lady came along for the ride. Scott was 23 and Mary Lib was 20 years old.

The B-26 Marauder had another name--the Widowmaker--since design problems with the short wings were still being worked out. As the wife of the squadron leader, it was Mary Lib's job to be an example to the 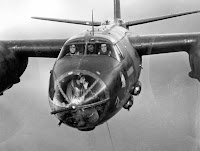 other pilots' wives. If a pilot "bought the farm" (died in training), it was her job to get to the pilot's house as soon as possible and either break the news to the wife or to console her until other help arrived. On more than one occasion, she was faced with an hysterical woman who wanted to kill herself. It was a lot for a 20 year-old to handle but then again, people had to grow up fast to cope with the situation. The phrase 'one a day in Tampa Bay' referred to pilot casualty numbers as the B-26's trained and as the young pilots found that 'coming in hot' (very fast precise landing) was what the new plane required due to its short wings and heavy fuel-load capacity.

Mary Lib's own situation became more precarious when she became pregnant and was hospitalized for a week in Septmeber with bleeding. Scott found his bride a plane ride back to Oklahoma City so she could see her family doctor. The news was not good. The young couple had RH-negative factor. The doctor advised that she should consider a late-term abortion and then plan to not have any other children. Scott had other ideas and consulted a man in his squadron whose brother was an obstetrics surgeon at Johns Hopkins. Advice from the surgeon was different-"Stay off your feet for the rest of the pregnancy and you might be OK." With regret Mary Lib stopped traveling with Scott and she and Lady flew back to Oklahoma City to wait out the pregnancy. 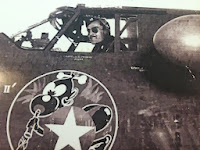 The couple exchanged impassioned letters and many telegrams but then Scott got orders: he was to lead the first squadron of American B-26 bombers to North Africa to join up with the British as they pushed Rommel to the sea. The 443rd Bomb Squadron of the 320th Bomb Group was ordered to leave Texas on Thanksgiving Day, November 26, fly south to Brazil, then hop to Ascension Island, and finally to Libya, North Africa. Mary Lib was due to give birth at the very same time and as the expectant father waited for some word from Oklahoma City, Scott's flight engineer "discovered" an oil leak in his plane that necessitated the squadron temporarily delaying take-off. The next day, Scott got the telegram he'd been hoping for: Mary Lib had given birth to a healthy boy they christened Scott Garret. Miracle of miracles! The oil leak was immediately fixed and the squadron left for war.

Postscript: Scott and Mary Lib are obviously my parents. I am the third of five children so they never let a small thing like RH-Negative get in the way of their desire to be parents. One last thing: Dad remembers that as they approached their landing point in North Africa, one of the plane's fire extinguishers exploded from the pressure and white foam filled the cockpit. The crew cleaned it up and cheerfully shoveled the white foam out the bombay, all the while belting out the song that topped the charts at home, Bing Crosby's "White Christmas". Enjoy the original http://www.youtube.com/watch?v=zL6Mgui9PyM  .