Stringing Along in December

This coming week I fly to Dallas and get to speak to the Dallas Quilt Guild and teach two workshops. The Saturday workshop is the Downhome String Star and remains one of my favorite patterns. Although I'm sure some Northern or Midwestern quilters made this pattern, it seems that Southerners embraced it and, as they say around here, "You can't throw a cat here in North Carolina and not hit a String Star quilt." They're everywhere and come in all different sizes and configurations.

One of the first quilts I bought when I moved to NC was found in a junk shop in Vanceboro NC. The owner confided it had been made by a black quiltmaker with the last name of Reels and as we examined, it was also clear that someone had turned the quilt over and used it as a painting drop cloth. The white drops of paint on the dark backing were permanent. Because of its age, I have never tried to get the paint drops out. By now, I figure they're part of the quilt's history. 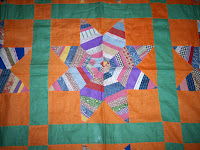 The other picture here is a detail from a String Star quilt top owned by Lynn and Will Gorges of New Bern NC. The top was hand-pieced by Will's mother Avis sometime in the 1940s or 50s and is still bright as the day it was made. 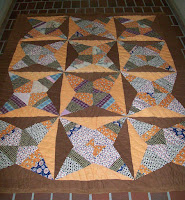 The brown and orange String Star quilt was bought in an online auction and hails from the state of Georgia and was likely made in the 1920s. This String Star is a large four-point star and a simpler version to make. The blocks are huge (18" square) and I admire the maker's bold choice of background colors. This is the one I'm teaching in Dallas. 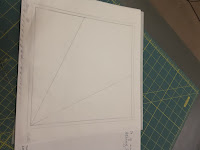 We'll use tracing paper (I provide rolls of this in the class) and make four quarters by #1) folding four layers of the paper and #2) tracing the pattern for a quarter of the block on the top layer (and darkening it with a Sharpie). 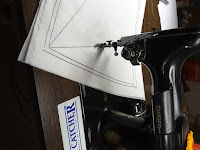 Then it's time to #3) head to the sewing machine. After removing the bobbin and thread, we use the sewing machine needle and "sew" (really perforate) all the paper patterns (keeping them in a stack) along the traced lines. 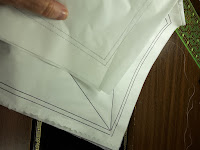 See the perforations going through all four layers? 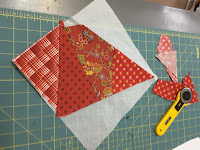 With the four quarters done, we #4) crazy-patch in a casual manner over the central star point.

Then trim and head back to the sewing machine to add background triangles. Once all the quarters are done they #5) get sewn together in a big block. Mine is a Christmas combo of red stars over a white-and-green checkerboard background. 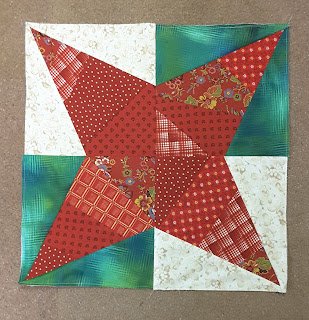 Although there's a lot of Christmas-theme fabric out there, my stash includes a healthy supply of reds and greens so I didn't have to shop. And that's what this technique is about: sewing over paper enables you to use fabrics of different weights plus use up your scraps to create a graphic overall pattern. There's just enough order to satisfy my designing brain while I revel in the multitude of pattern and different shades. Kind of The Builder meets Ms. Attention Deficit Quilter. Very satisfying work for a cold December afternoon.

I have made a rather large quilt in this pattern--multi-color jewel-tone Stars on top of a black-and-white checkerboard. I am still hand quilting it. I will drag it to Dallas and demonstrate Big Stitch quilting at the class. Might as well get in a  few stitches! 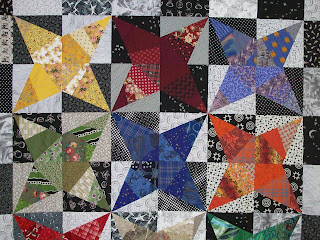 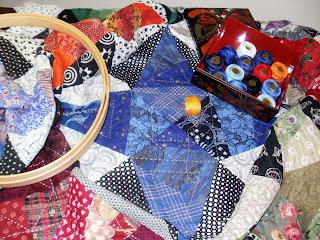 Sometimes the stars line up. Nothing else can explain all the cool pictures from students I've gotten recently. In classes I try to reassure students-"I don't care when/how it's finished but please send me a picture of whatever you make as a result of this class." Sometimes months/years pass before I see any pictures. But recently there's been a plethora of student pictures and they do my heart good. I swear these pics arrive just when I need them--a rainy day, a rote-work-all-day at the studio, or a "I haven't an idea what to do-" day. The picture comes in and bing! I can take my thumb out of my mouth and move. They have no idea how important these communications are. 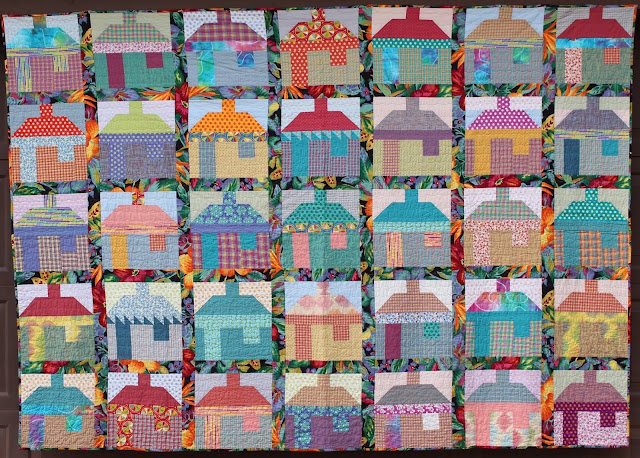 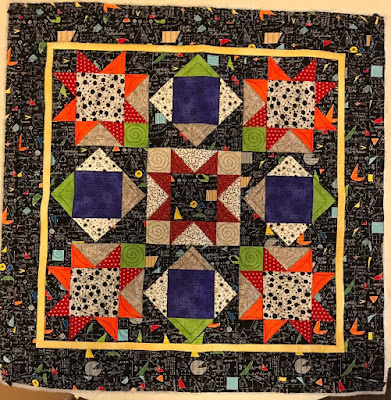 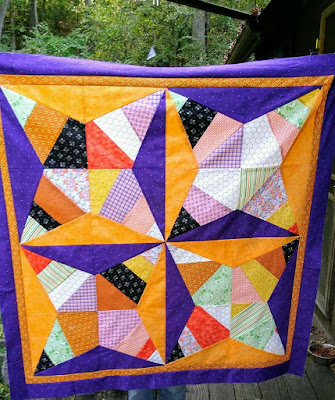 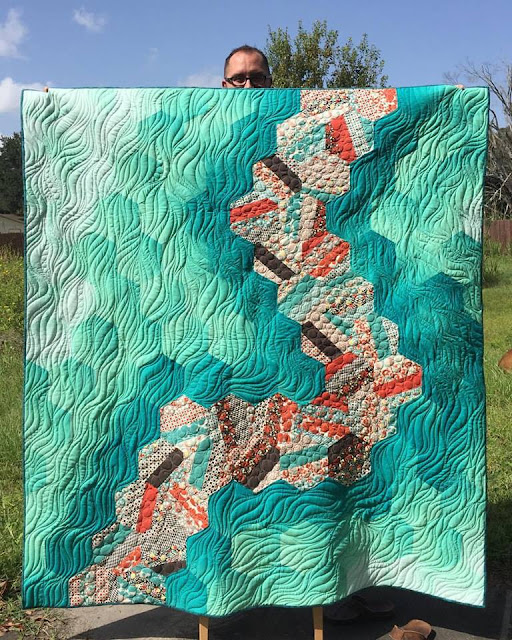 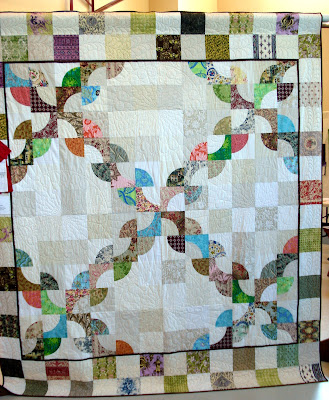 Michelle Owens' Drunkard's Path quilt from (I think) a class in Vermont five years ago.

There are more pictures but for now, please enjoy these. This is why I teach.

What do you think of when you hear or read the name Pantone? Nowadays most of us assume Pantone is a fashion/trend dictator that identifies color trends. Pantone is a business that has morphed from a modest printing business in the 1950s to a cosmetics color matching company and finally into THE ink and paint shade coordinator for all things retail. Pantone immediately understood the advantage of showing digital color images on the internet and and since 2000 has issued its Color of the Year pronouncement every December. 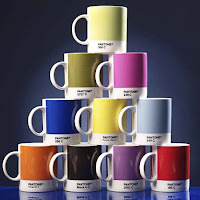 Adored by decorating and color bloggers, Pantone is the most savvy color forecaster of the day. The trick to understanding Pantone is to realize that its color hounds are not exactly leading the pack. Rather Pantone specializes in identifying what's popular from influential entities (like fashion designers) and packaging that knowledge for the rest of us in the hinterlands. My favorite tea mugs are a good example.

And thus to the most recent display of color trends on show: New York Fashion Week started September 7th and goes through next week. Pantone's already on it. Today they issued a ten-color mini-palette of colors they say will be popular Fall/Winter 2017 and even into Spring 2018. Here 'tis: 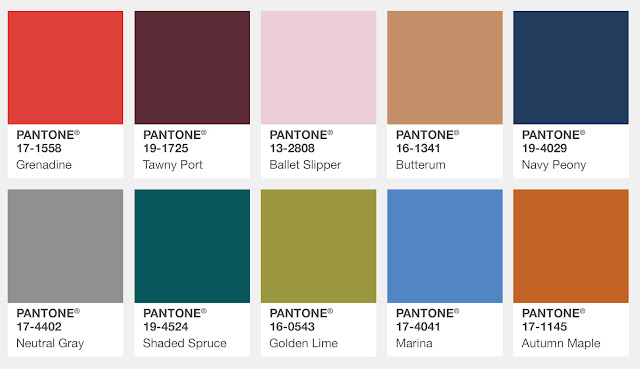 Since quilters love color and might want to see if they can emulate the Pantone Fall palette in their quilts, here's my version of those shades and I call it Pantone Punk'd. From the Peppered Cottons line meet Flame 06, Aubergine 34, Cottage Rose 06, Tobacco 85, Ink 45, Charcoal 14, Marine Blue 11, Bright Kiwi 64, Blue Jay 41, and Rust 96.

I didn't have a close equivalent to the rather anemic shade of beige Pantone calls Butterum. Instead I substituted the stronger brown called Tobacco.

Before I go, I have to voice my disgust at new fashion designers discovering--again--the artistry of vintage quilts and appropriating them in their clothing. Not dissing the manufacture of garments mind you. Lauren cut up thousands of antique quilts in the 1990s and now it's Calvin Klein's turn. But c'mon-this 1930s pink-and-white Snail's Trail looked a lot better as a quilt. Cutting the quilt as the coat body and then pairing it with wool plaid sleeves looks downright silly. 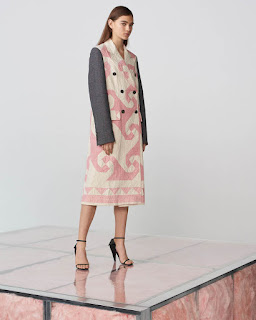 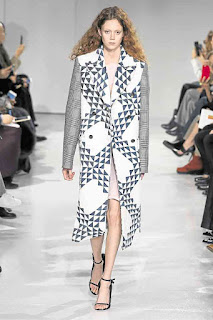 OH boy--this bored model with a desecrated blue-and-white Ocean Waves quilt cunningly equipped with Glen plaid sleeves.      (I wish there was a font for sarcasm.) 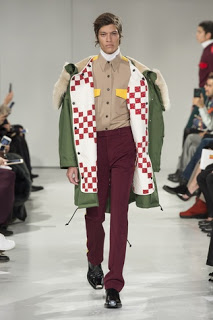 And this poor dude who's all ready for Christmas in his red-and-white Irish Chain quilt coat lining. Aarrgghh! 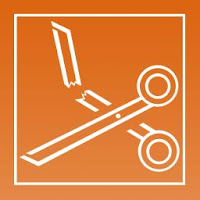 A curse on all you quilt cutters! 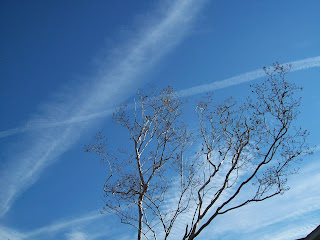 When Spring comes to Eastern North Carolina, it's not gentle. It knocks with loud thunderstorms
alternating with flashes of brilliant sunshine and skies so blue your eyes naturally squint when looking skyward. Sunday was a great day to photograph a few new quilt works on the fence in back of the studio. It also took lots of push pins so nothing would blow away!

In March I had the opportunity to showcase some of my work while filming segments for the Quilting Arts program that airs on PBS. Everything I shared on the program had some connection to Japan.

My husband and I have collected Japanese woodblock prints for 30 years but unfortunately I've never been to Japan in person. That trip is on my bucket list. In the meantime, I continue to sashiko (Japanese-style hand quilting), make furoshiki (wrapping cloths), and now have added the concept of kintsugi to my repertoire.

Kintsugi is not usually a term applied to the textile arts but it perfectly describes what's going on now right now within my brain's creative ferment. Kintsugi actually means 'mended with gold' and is more often associated with pottery. The story is that a shogun of Japan broke his favorite tea cup and sent it back to the potter for repair. But the repaired cup was ugly with metal staples so the cup was then sent to a jeweler who repaired the cup with layers of lacquer mixed with gold dust. The repaired cup with gold veins outlining the breaks was a work of art. The shogun loved it and thus kintsugi became popular especially with cups used in the tea ceremony.


On a philosophical level, kintsugi came to mean appreciating the beauty of that which is broken and mended. You embrace the repaired-mended and celebrate its new form. It applies to my work in the following way: I never throw away my work however small. Little blocks from sewing demonstrations, small pieces that are handed around in classes so student can view the work and of course UFO's (unfinished objects) of every size--I save them all. They will eventually find their way into kintsugi work.

The quilt titled Kintsugi #I came about when I pillaged the sample drawer and started grouping some pieces I thought could live together in a quilt. The blocks lay on the grey carpet of the storage room for a couple of weeks and I would walk in, move a few things, and leave again. There was lots of space between the blocks but I knew they could be united harmoniously by the right fabric--just as gold holds together the cracks in a kintsugi cup. I found the perfect fabric--a shot cotton from my stash. It was a two-color weave of bright yellow with black (Char Gold #12 in the Peppered Cottons line) and was the perfect kintsugi fabric. The overall effect is a bright mustard color but it changes slightly depending on the angle of viewing the quilt. I love that about shot cottons in general--they are solids that change. Cool. 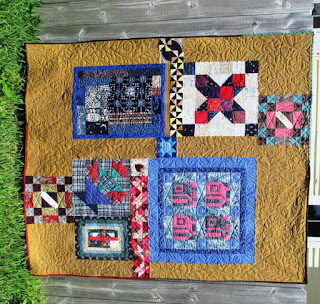 Some details from Kintsugi #I .

The longarm quilting is by my friend Laurie Mayo.

Got another kintsugi work in progress and this one's apropos for Mother's Day. The quilt top design is an off-center medallion. In this case a Provencal napkin reworked with an embroidered spider web in the middle. Framing the napkin are tiny Pinwheel blocks donated by my friend Bonnie Bus. Why an embroidered web? Spiders were some of my Mother's totem animals and she never allowed us to squash them. 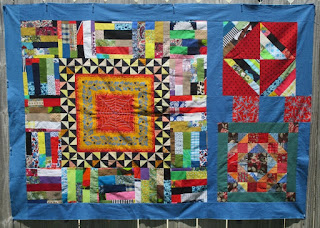 All the strip patchwork is my mother's work and I've been hoarding it since I unpacked my luggage after her funeral in 2002. Her strip quilting technique was rather casual but I will confess: just before cutting the blocks, I prayed and said, "Forgive me Mom-" as I sliced them with a rotary cutter. 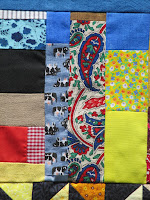 The narrow paisley scrap is left over from Mom making me a long robe to take to college in 1969.

The mod print linen is from my high school graduation dress. The colors of Edmunds High School (Sumter, SC) were purple and white.

I think Mom's kintsugi quilt will eventually get another border. 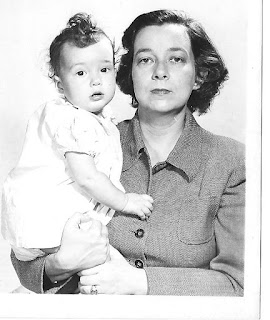 Meanwhile it's Mother's Day again--always bittersweet if your own mom is no longer with you.  The picture is Mom and I in 1952. It's our passport picture, the one taken before our family left for Germany.

Happy Mother's Day to all the Moms--those still with us and those who've gone ahead.