Folks in my family have a tendency to look up. We study the sky, both daytime and evening, are restless during full moons, and try to track stars and satellites. I was a little girl when Sputnik, the first Russian satellite, went into orbit. We lived on an Air Force base in Charleston SC and my sister had girlfriends over for a slumber party. We were hanging out on the swing set in the backyard when my parents came out to tell us we might see Sputnik go overhead. And we did see it, blinking faintly as it tracked across the deep blue early evening sky. My father strained to see it and then finally stomped back into the house in a foul mood muttering,"Damn it! They beat us to it!"

Fortunately stars, as in star blocks made into quilts, are much-loved images and not

controversial subjects. This picture was taken in Houston, TX where I recorded an interview for the Under the Bed project. The quilt behind me was called Starry Night and appeared as the calendar quilt for 1996 for Oxmoor House Press. I still love it and teach the star patterns.

Yesterday my Uncle Otto from Dallas checked in to tell me that due to his post-polio symptoms, he's going to get a motorized wheelchair. 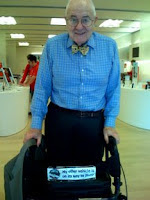 I replied he needed to get flames painted on it, or make room for bumper stickers, or maybe rent out space for ads. Quick as a shot, he zapped back this picture. As an astronomer and lifelong technophile, Otto loves all things Apple and sent this on his iPhone. Notice the bumper sticker that says, "My other vehicle is on its way to Pluto."
written by Pepper Cory