OK, this isn't a quilt-related blog post. Rather it's a short rant on what happened to me at the West Palm Beach airport last Sunday as I flew home from the World Quilt Show. Morning was going fine and I even had time to have breakfast with my roomie Robbi Joy Ecklow at the airport. It started to go downhill when my name was called to board my plane to Charlotte-yikes! My watch battery had run down and I was perpetually stuck at 9:07 AM. Trouble was, my flight boarded at 9:45 and I was late, late, late! 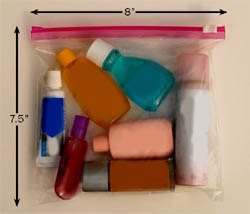 So I hoofed it through security and that's the first thing: if TSA sees you're in a super-hurry, they might watch you a bit closer. I dutifully handed over my plastic bag with toiletries and was stunned when the TSA agent (a rather short shaved-head gentleman with a large-size ego) approached me with my shampoo bottle and demanded "Ma'am--are you willing to surrender this bottle?" What? The plastic bottle, bagged as it was, was too big! They want itty-bitty bottles (see picture).

Jittery about possibly missing the flight home (that's my excuse-) I shot back at him, "Look, there's only a 1/2 inch of shampoo in the bottle--can't you see it?" He didn't glance at the bottle. "Look, I've been at this job two years and I know the rules-" he firmly said. And Lord help me, the words were out of my mouth before thinking, "And I bet you've been a pain in the ass for a lot longer-" and then stopped. I locked eyes with the TSA agent. Oh man, this guy had the power to pull me out of line and make me miss my flight-what was I doing sassing him?

The stare-down didn't last long. I lowered my eyes, said, "Yeah sure-" to the demand to 'surrender the bottle' and beat it out of there. I just barely made the plane but learned something on reflection: re-check your time on something besides your own watch and if you want to get home, don't--ever--argue with a TSA guy.
written by Pepper Cory

Oh, dear god, you didn't! You were lucky not to get the cavity search.

Oh Pepper! How many times have I said something, before I edited myself!! Glad you got away.

Those people always make me nervous. For the exact reason you said, they can make you late, or even a living hell. Sometimes I think it attracts people in need of having power over others. I know they have rules, but I don't think that you look anything like a terrorist!

What a dilemma for your older sister!
If you had been detained part of me would have said "serves that smarty right - will she ever learn to hold her tongue??" But as I age and increasing couldn't give a rat's ass what people think, I find myself saying similar things. But I draw the line at TSA! I know 2 people who work for them and they are ALWAYS on a power trip - you are lucky.

Not a 'funny' situation but thank you so much for the laugh!!
Good for you, I mean really fussing over a dribble left???
R

Too funny! My DH's favorite saying to me is that I "let my elephant mouth overload my hummingbird ass!"