The cats in the sink and no green ham (pardon me, Dr. Seuss) 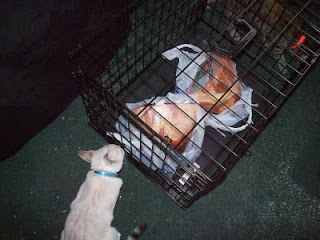 Yesterday I spent the day at home, baking two humongous hams for a potluck supper last night. I'd bought the ham the night before but the refrigerator was too full....what to do? It was still cool outside so decided to stash the hams on the side porch. The only problem: kittens who thought Ham was wonderful! So, I pulled a switch on them. 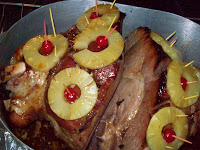 I went and got the kittens' 'night cage' and put the hams inside to protect them from the marauding animals. (Until Earl and Gipsy were three months old, they always went into the night cage to sleep. Using the cage gave us a good night's sleep and we weren't afraid of stepping on one of them in the dark.) The ham cage worked! And the hams came out beautifully. 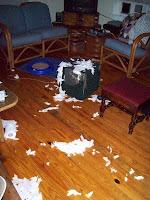 We went to the supper without thinking about leaving two slightly-PO'd kittens who never did get a bite of ham. And came home to...a white Christmas! Gipsy and Earl had "decorated" while we were gone. The toilet paper put up quite a fight but was no match for two sets of eager claws. 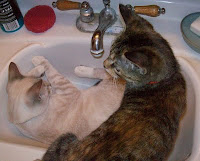 This morning they had a shoving match on who got to sit in the sink after Rod shaved. As Rod lets out the hot water, the kittens jump into the still-warm sink and loll about. It's obvious they're growing fast because the two of them no longer fit into the sink together. Gipsy is impatiently waiting her turn.
written by Pepper Cory

wonderful story and photos Pepper! It reminds me of the time that Terry Person's two kittens found the bag of embroidery floss she had just bought and decorated her entire apartment with the strands of floss.

Oh the things the little critters think to do to entertain themselves:)
We don't get nice clean toilet paper but instead trash dug out to remind us how dumb we are:0

Too cute! There's nothing quite like kittens for endless amusement!

Oh my gosh but they're funny! ;D Cute pictures!!

Great story. There is never a dull moment with kittens/cats. We still talk about our kitties and the things they did or the thoughts we endowed them with, even though they are no longer with us. Bonnie B.